Let's talk about KATZENJAMMER, a Norwegian world-folk pop band! Katzenjammer is comprised of four women who all sing lead, all write, and all play every goddamn instrument under the sun. If this isn't exciting to you, now is the time to leave.

The band is named after the century-old American comic The Katzenjammer Kids, but also the German word "katzenjammer" referring to a cacophony (literally translates to caterwaul.) The name of the band is German but they're all Norwegian and they sing almost exclusively in English. (I assume this helped them find a level of notoriety among greater Europe.) I found out about them through a Wikipedia page on one of the obscure instruments they employ! (This is my favorite way to find music. Are you familiar with Spokes Mashiyane, the tin whistle king of South Africa?)

Wait, let me also quickly say that this is a good band for an Internet Person to get into because there is SO MUCH footage of them out there, they enjoyed a measure of success in Europe and there are tons of professionally shot full concerts, performances on television, weird sets in like startup offices, official promotional videos, and fan-shot concert footage to get lost in. If you need a project for the month, consider Katzenjammer!

SOLVEIG HEILO is I believe the founding member. She is a drummer and trumpeter, but also steps to the front to sing lead on some of their poppier songs. But also she typically sings the more dramatic classical folk songs. Here's a video of Solveig playing trumpet and singing perfectly in tune even though they're in like -500 degree weather. A valve on the trumpet gets stuck!

ANNE-MARIT BERGHEIM is I think the second member. She is the ringer, it seems that whenever there's a solo to be played, more often than not it falls to her. She sings some of the more twee folk songs, but also some of the more minor-key-folk-stomp ones. Here's a cute song she sings with a powerful instrumental hook.

TURID JORGENSEN is the third member! They all met at some sort of music school, but Turid has been quoted saying she never expected to be a musician, which makes her the most relatable member. She plays bass most of the time, and they gave her all the punk songs to sing until the third album. Here is a terrifying song she leads.

MARIANNE SVEEN was the last to be added, but she is as close as they have to a frontwoman. The most flagrant displays of virtuosity, especially vocally, are performed by her. Around the second album, she started writing and primarily singing her own songs. Here is Demon Kitty Rag, which is probably? their most well known song? Like in a Youtube hit kind of way. I'm just embedding this one:

Also! MATS RYBO is the band's primary songwriter, he's like the shadow godfather. But everyone writes. 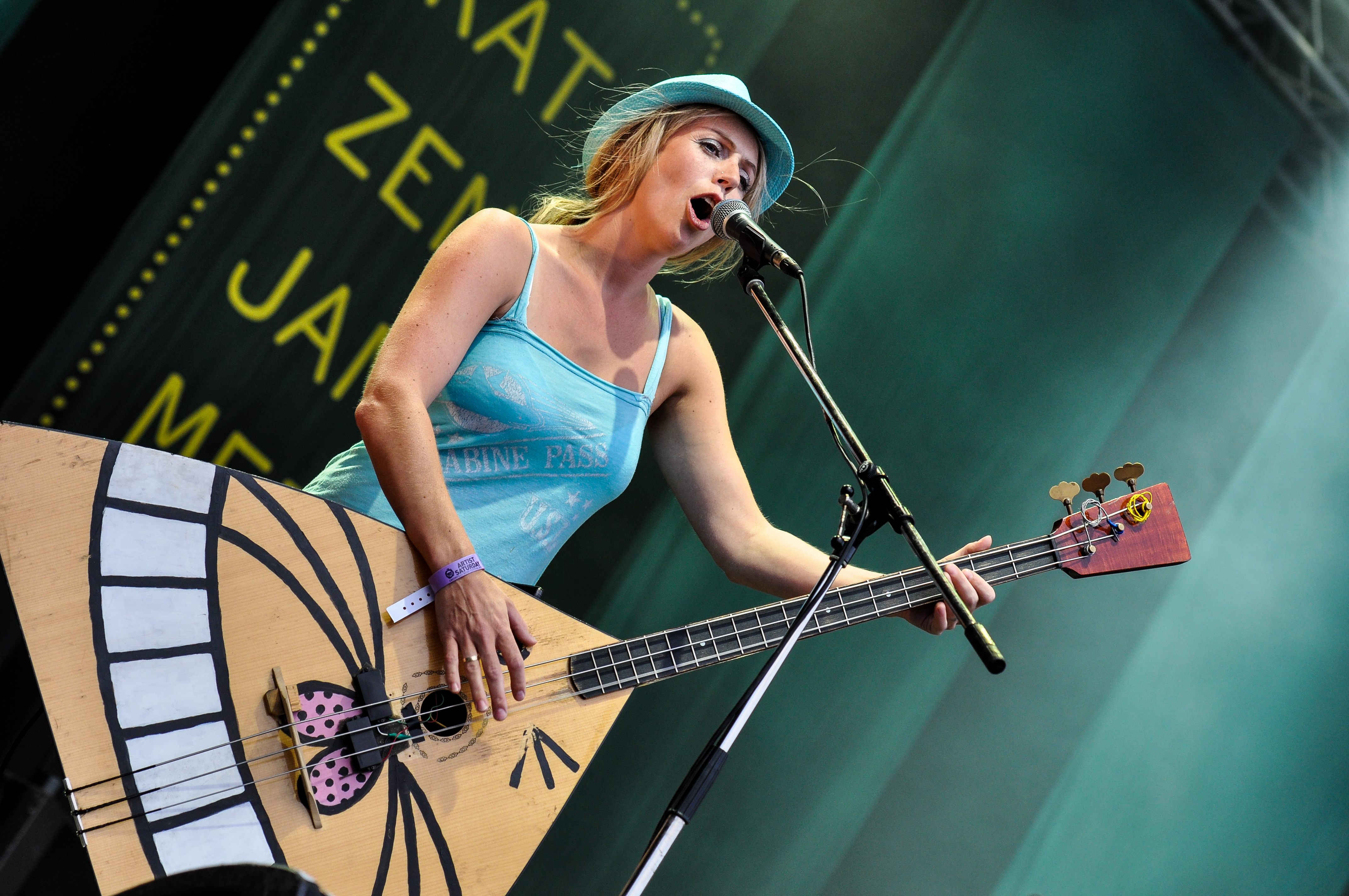 This is a contrabass balalaika, it has three strings, E-A-D. It has to stand on an endpin. They painted a cat face on it. I believe they've gone through two contrabass balalaikas during the band's tenure and they named both of them after a (Danish, I want to say?) late night television host. Turid plays the contrabass balalaika most frequently, followed by Marianne, but everyone gets a turn on it. For their third album cycle, they also started playing an electric bass guitar, which was CRAZY. Where were you when Katzenjammer went electric? Apart from their stage keyboards (which are typically meant to fill the role of acoustic pianos & celestes), this is the first and only meant-to-be-electric instrument of their stage show. WAIT, the toy piano they use is electronic. Also I forgot about that solid body mandolin they toured with in 2016 in the videoI linked to from the bass guitar words. 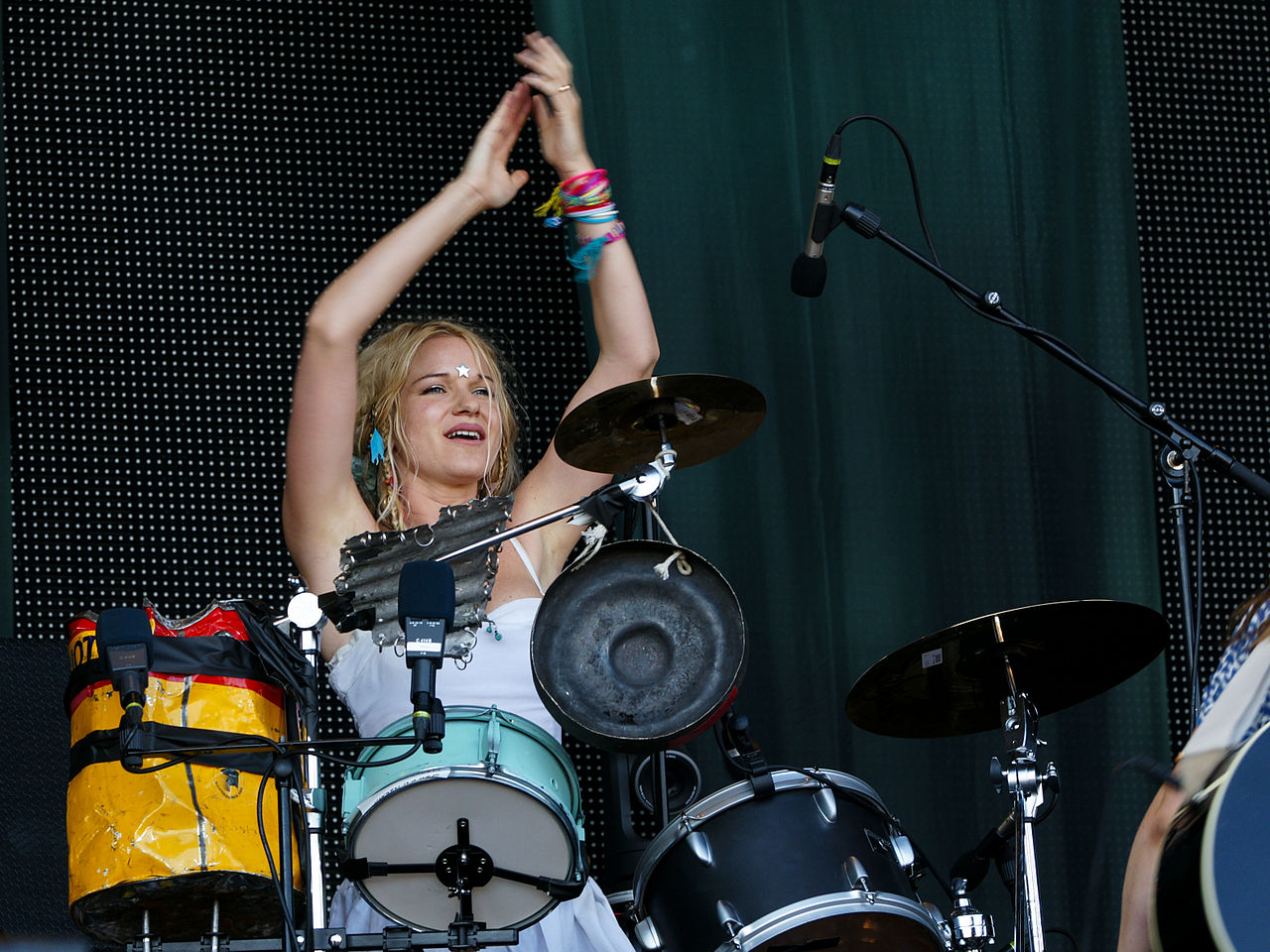 The drumkit is partially garbage. Just a bunch of like trash can lids and toy drums to beat on. Solveig is the trained percussionist in the band but Marianne and Turid also drum.

Another thing to note is how frequently these kids play multiple instruments simultaneously. Often you'll see Solveig or Turid at the drum kit just playing kick & hi-hat with her feet and playing like banjo or domra or accordion or mandolin with her arms. On the single "I Will Dance (When I Walk Away)," it is called to attention that Anne-Marit is simultaneously playing harmonica with her head, accordion with her left hand, and glockenspiel with her right hand. It cannot be overstated how influential this was to me as a (child? I was probably like 19.)

But yes, they play all sorts of stuff live. This is the list I can think of: accordion, bass guitar, contrabass balalaika, domra, keyboard, acoustic guitar, octave guitar, mandolin, banjo, drums, ukulele, glockenspiel, trumpet, dobro, harmonica. They play other things on recordings, zithers and marimbas and tubas and stuff.

The objective of this band appears to be to explore Western folk music in all its forms. Sort of pan-European, but there's some American country and blues and what sure seems like it's meant to be a modern take on a spiritual. This is great, but also reductive. It exhibits a sort of unchallenged naivety towards cultural appropriation - just like, there's not enough people telling them "no" sometimes. This is also displayed in some of their fashion choices. Of course I love all the looks on display - especially early on, the thrift-store aesthetic was part of the appeal. But like, if you REALLY want to get into it, yes, I suppose a case can be made for Norwegian dreadlocks, vikings and all that. Fine, whatever. But Marianne, what is that afro wig from like 2012. Why have you done this. Why do you have TWO of them. It's frustrating.

Should we talk about the albums?

LET'S TALK ABOUT THE ALBUMS

LE POP is the debut! Right away we are introduced to this band's tendency towards long, drawn-out intros. It's nice as scene-setting, but I think it makes the band hard to recommend to someone sometimes. Hey Ho On The Devil's Back is an absolute barnstormer but first you have to get through the first 50 seconds, which was like extended to two or three minutes on stage. The first track Overture is the theme from Der Kapitan played at dirge tempo (Der Kapitan also starts off this way), Le Pop and Tea With Cinnamon feature distant keyboard interludes that probably should've been separate tracks.

Tea With Cinnamon was the single, super cutesy, melodic, packed with vocal harmonies. The third verse is in waltz time, which was an idea that wormed its way into my head, such that I tried to write SO MANY songs that year that did the same thing. (Mine were never as good.) The story is that they played that song so many times when they were just starting out that they all got tired of it. They stopped playing it around 2010 or so. Booooo.

A KISS BEFORE YOU GO

is the follow-up! It feels a little more radio-ready. There are ELECTRIC GUITARS. (Dweezil Zappa plays one.) They do a Genesis cover. The single I Will Dance When I Walk Away is a big ol' shimmering pop-country song, and the other single Rock Paper Scissors is only slightly less of a shimmering pop-country song. Unfortunately the whole thing sounds a little more compressed and over-produced whereas the previous album felt like a big punk jam.

Cherry Pie is like a follow-up to Demon Kitty Rag in sensibility but with the sonics and themes of Tea With Cinnamon, it's like Marianne looked at their two big songs and combined them. No drums though. Real cute, got an Andrews Sisters vibe.

Loathsome M is kinda frustrating because that's the song they gave to Turid for this round, that and A Kiss Before You Go which is like 40 seconds of singing. She gets to do a psychobilly voice for some of it but, I mean, of all songs this band has had across three albums, it feels the most like an "album track." The band had been playing a different Turid song live called Listening To The World which had a little more of a 90s Pogues vibe, I thought it was a stronger contender, but Loathsome M has some more interesting turns and a better chorus. (I definitely ripped it off, at least slightly, on my song Crack First.)

ROCKLAND is their last album; Marianne left the band in 2016 after the tour - she was doing some solo stuff (it's good btw). Plus everyone started to like get married and have kids. (Solveig also did a solo album.) But Rockland is the most modern of their albums, sounds like an indie pop record from the 00s. I mean, an indie pop record with entirely acoustic/folk instrumentation, of course, but still. All four of them wrote songs that sound like Modern Indie Pop - Solveig has Oh My God and Shine Like Neon Rays, Marianne has Driving After You (which feels like it has some of the 00s soul vibes her solo stuff has), Turid wrote her first song "My Own Tune" which has a, uh, not quite a rap bridge but a sing-songy fast-talkin' verse in Norwegian (only instance of them singing in their native language on a studio album), and Anne-Marit has Flash In The Dark, which sure sounds like it has some synthesizer on it.

The title track "Rockland" is apparently about, like, Ginsburg's Howl, which I've never bothered to read because I don't care about 60s drug men. It's pretty sounding, but there are a couple awkward Mats Ryboisms in there that keep me from totally getting into it. Why am I talking about a song I don't especially like? Because they named it Rockland, which they pronounce like "rock land," and then whoever designed their t-shirt googled "rockland" and found a map of Rockland County, New York, which is the place where I grew up. Am I the only person who's ever worn that shirt in Rockland County? I don't know, when I was in high school I had a teacher who was married to someone working for Hornblow artist management. That was crazy.

What else? Solveig gave her song "My Dear," which she used to sing, to Turid. Old De Spain and Bad Girl have an American dobro growl that they never really messed with before, and I didn't, love it,,, I do like Turid playing drums with her hands and not just her feet though.

It's weird that the band sort of homogenized in this way as the four of them started to write more by themselves (without Mats). Maybe when he was writing all the songs, they felt more of a need to mess around with the arrangement and orchestration and interpretation and, style. On this record, Turid plays bass on all but the last 3 songs, Solveig is on drums except when she's singing (sometimes even when she is.) Everyone stuck to their role. Weird. As we get older, we get simpler.